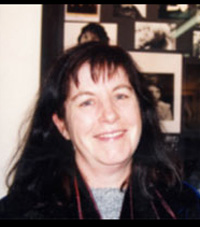 Jean Bardon was born in 1952 and attended Dun Laoghaire College of Art from 1970 to 1974. In the following year she worked as a studio assistant in a Graphic Design Studio, Bopart International BV, in Amsterdam. It was here that she first developed an interest in etching.

From 1975 to 1976 she worked as a production assistant to Eamonn de Buitlear and then took up teaching in secondary schools both here and in England.

In 1991 she returned to etching when she joined the Graphic Studio in Dublin, undertaking further classes under the tuition of Stephen Lawlor and James McCreary. She is now a member of the Graphic Studio. Jean Bardon lives and works in Dublin.