Derek Biddulph lived in Galway for over forty years. He had no formal art training, although he did study commercial art for a brief period. He became a painter almost by accident, and it gradually became more and more important in his life.

He came to Galway to work as a display artist for Cadburys Chocolate which involved dressing shop windows but quite soon he got involved with the Patrician Musical Society painting sets and soon he was being asked to draw or paint Galway scenes. He had also been involved with the Church of Ireland theatre company; Lamplighters.

Eventually he gave up his job to devote himself completely to painting. He thoroughly enjoyed painting and teaching painting to others. He had many successes and achievements since becoming a full-time painter. He has had several one-man exhibitions in Galway and in several other locations in Ireland and United Kingdom.

Derek Biddulph has painted Galway in all its moods and in all of its colours for many years, discovering fresh angles from which to approach its ancient remains as well as its more modern face. Many of his paintings, either in oil or watercolour, are celebrations of the citys main features. 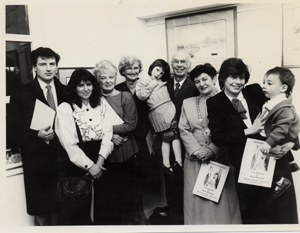 He was a very accomplished artist; this became clear when he spoke about the actual process of painting. Watercolour is a notoriously difficult medium that requires both great patience and considerable skill. Interestingly, Derek began painting oils, a procedure that is not normally recommended for the beginner. But he found it easier to master this particular medium because it allows the beginner, as he was many years ago, to work with a more solid medium, and gain experience of depicting form and shape with confidence before tackling the more liquid medium of watercolour.

Derek was a visual chronicler of Galway, a city he grew to know and love intimately over the forty years of his acquaintance with it.

Sadly, Derek passed away peacefully in February 2008 and he is survived by his daughter Anne, his son Peter and his grandchildren. He is greatly missed.