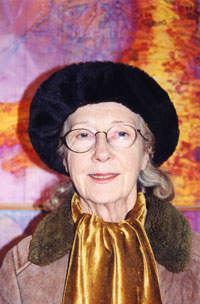 Patricia's Irish Exhibitions include a major retrospective at The Kenny Gallery in 1999, Listowel, Graphics at the Douglas Hyde Gallery in Trinity College Dublin, the Arts' Council Gallery in Belfast and the Arts Society Gallery in Cork.

She was shortlisted for The Alice Berger Hammerschlag Award in 1979 and she won awards for Etching "Oilean 7" at Barcelona 1989 and for Etching "Gaillimh" at Listowel International Biennale 1982. Patricia was a guest artist at the Clifden Arts Festival and the Galway Arts Festival.

"Above The Waves, Calligraphy" a collection of Patricia's poems and etchings and the script of her stage play "Eclipsed" published by The Salmon, were launched by Michael D. Higgins, T.D and Minister for Arts, Culture and the Gaeltacht in Kennys Bookshops & Art Galleries on the 9th of September 1994. She held an exhibition in Kennys in September 1994 in association with the publications.

Patricia was awarded a Scotsman Fringe First for her stage play, Eclipsed at The Edinburgh Theatre Festival in 1992. Eclipsed was also named Critics' Choice and shortlisted for the "London Independent Theatre Award". Eclipsed toured extensively playing, amongst other venues, at the Project Theatre in Dublin, the Hawks Well Theatre in Sligo, the Garter Lane Theatre in Waterford, An Taibhdhearc in Galway, the Cleere Theatre in Kilkenny, St. John's Theatre in Listowel, the Arts' Centre in Wexford, Richard De Marco Theatre in Edinburgh and the Tron Theatre in Glasgow.

The American Premier of "Eclipsed" at the Forum Theatre, Worcester, Massachusetts in March 1994 won the prestigious Moss Hart Award for Theatre 1994. The Italian Premiere by "Associazione Teatro Firenze" took place at Teatro Tredici, Via Nicolodi, Florence in April and May 1994 and a second production went on in February 1995.