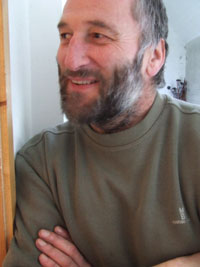 Liam Butler is originally from Kilkenny and now lives and works in Galway. He is a welder by trade and worked abroad in Germany and America for many years before returning to Ireland.

He is an outstanding craftsman who having mastered his materials, began to express himself artistically. He is a completely self-taught sculptor who works in welded steel, copper and bronze. In more recent times, he began to experiment with woodcarving.

His immediate environment inspired his debut solo exhibition which was held at The Kenny Gallery - birds, currachs, fishermen, farmers, musicians and dancers. His second exhibition at Kennys showed significant development as he portrayed the natural elegance of species of birds - godwits, herons, cranes, kingfishers etc. His third show - Taking a Leaf -continued that willingness to experiment, that growth in confidence with new subject matter as well as revisiting some of his old favourite ideas.

Liam has been showing at the Kenny Gallery for over ten years now. He has also had solo shows in the Jonathan Swift Gallery in Carrickfergus and in Whichcraft in Dublin, and taken part in group shows in An Damhlann - A Kenny Gallery, Co. Galway and in the Frank Lewis Gallery, Killarney.

The art of direct metal sculpture, as opposed to metal casting, belongs essentially to modern times. Though some metal sculpting techniques were known to ancient man, they were employed mainly in craft work such as the hammering and beating of armour, and the carving and engraving of jewellery.

The discovery of oxyacetylene welding in 1895 brought many new possibilities and scope for sculptors, in scale and in technique. Many artists were quick to realize metal's positive qualities as a sculpting medium - it can be cut, welded, moulded, cast, polished or patinated, and it is very durable.

Any means of fusing metals is known as welding, and it is normally done by flame-welding using oxyacetylene. This is a combination of oxygen and acetylene, and is the most common source of energy for the heat. The welders torch, or flame is run along the two pieces to be joined until the metals melt and fuse.

It used to be regarded as an engineering process, but there is plenty of scope for creativity. Guided by imagination and inspiration, Liam Butler plans a basic design and gradually builds it up. There is an elegant simplicity about some of his work, and in others he adds lots of decoration and adornment, giving us some wonderful colour effects and an amazing variety of forms. He obviously has great fun making these creations, and will surely enjoy the smiles they bring to the viewers of his work.