Browse works by this Author 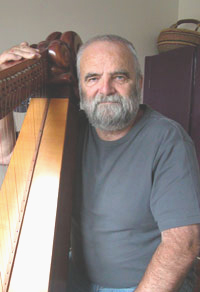 George Callaghan was born in County Antrim, Northern Ireland in 1941, attending Carr's Glen Primary School up the Old Park Road. At the age of four his family relocated to South Africa. He became the Western Province Boxing Champion (Gnat weight division). At the age of 14 the impending death of his Grandfather forced the family to return to Belfast.

George attended Ashfield Secondary Intermediate. He left school at 15 to work at Nicholson and Bass (printers and box makers, Alfred Street) as an apprentice Commercial Artist. A year later he commenced studying Art at the Belfast College of Art on a Scholarship. George started work in Dublin as a junior designer with Janus Advertising Agency and 8 months later moved to Kennys Advertising Agency as a senior designer. He then moved to London as a designer. Eight months later he emigrated to Sydney, Australia. For a year he worked as a senior designer at McCann Erickson then moved to Leo Burnetts where he stayed for the next 11 years as an Art Director. At the age of 32 he then moved to the Australian island state of Tasmania where he has lived for the last 27 years. In this time he has been recognized as one of the State's leading Artists. He also enjoys the reputation of being Australia's leading Harp maker and a leading exponent of the Celtic Harp. The recordings of his harp music include two compact discs, "Traditional Airs", "Rhyme and Reason" along with several cassettes. He is now living in Tasmania, Australia with his wife Stephanie and five children.

Although Callaghan attended the Belfast College of Art from 1961 to 1965, he insists that most of his skills and discipline he has learnt from advertising. He is a strong believer that no one can teach art because no one knows what art is. All you can teach, he says, is technique - and leave their minds alone. And he contends that he now paints in the style he developed before he received any fine art training.

He enjoys painting in an almost naïve style - landscapes without depth or perspective, chimneys with identically stylised puffs of smoke and trees symbolised as little green balls on a stick. Drawing, design and colour are finely developed in his meticulous painting technique.

Callaghan counts the surrealist, Escher, as an influence. He has borrowed elements of Escher to adapt to his own purpose: a beguiling gift for symmetry and pattern and close attention to detail.

Music is also a great influence - the musician appears often in his works.

A book collecting examples of his work, "Art Works", was published in Tasmania in 2004 and won a number of PICA awards.