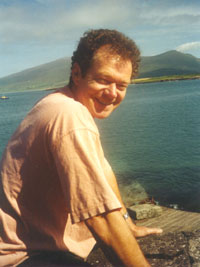 Michael Flaherty was born in Cloghane on the Dingle Peninsula, County Kerry in 1950. Michael studied in Maynooth, Cork and Sligo before returning to Kerry in 1989. Here he developed his distinctive style of painting to convey his love of the Kerry landscape.

"Michael Flaherty is best known for his landscapes, spontaneous, lyrical compositions that bring to mind aspects of the work of artists as diverse as Vincent Van Gogh, Paul Henry and Sean Mc Sweeney. He is uninhibited in use of paint, that is of the physical stuff, the pigment itself, which he has on occasion worked in layers of imposingly thick impasto, and of course in his use of paint as colour."

"Flaherty's work clearly doesn't set out merely to record a scene in terms of its appearance, it enacts the excitement of the sexual experience of an environment and, equally, excitement of painting."

"Michael effectively conveys a sense of panoramic space by simplifying his subjects rather than getting bogged down by fussy details. Elemental shapes saturated with intensive colour - red, blues, greens, lilacs and pinks, earthen colours vary according to the changing conditions, communicating to us not only the artist's perceptions but also his powerful feelings for his native Dingle peninsula."

"This is a remarkable exhibition. Incredibly fresh, incredibly instant. He captures very quickly, scenes which he's very, very familiar with. He's been seeping up this landscape for quite some time, but when he parks the canvas by the side of the road, or the middle of the field, or wherever, zoom, he's in there and out in jig time. Remarkably few mistakes, but he captures that instant to perfection...

Remarkably assured technique... bright pictures, just celebrating his local landscape... Then there are darker ones, like the cliffs at Dunquin, deep black, bits of navy deep sea, then this forbidding cliff face. This is the power of nature: you don't mess with that.

The painting of the wave is dark, frightening. Nolde did famous wave many years ago, but this guy is doing his own thing. He owes nothing to nobody, but he's a very self-assured painter, whether it's these bright, happy scenes which sucks us in to enjoy the sunshine, enjoy the landscape, he has us under control. Remarkable pictures"

His work has featured in many group and solo shows around Ireland, Britain, Europe and the USA. His work is represented in a wide variety of public and private collections including Irish Life, ESB, Dublin University, Kerry Food, various Government Departments, New York University and Commerz Bank of Frankfurt, as well as others listed below: