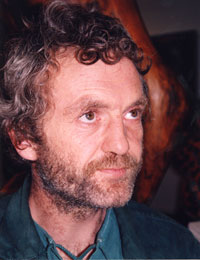 "Originally from Co. Down, I started carving in Belfast in 1981... something to relieve the tensions of the time. It was bog-wood (oak, scots pine and yew) that truly triggered the imagination and since 1982 I have obsessively worked on nothing else." 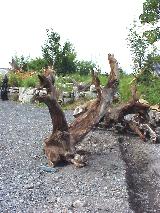 "It's the ancient nature of the timber that intrigues and confuses... a 5,000 year-old wood buried and preserved in the extensive bog-land of Ireland. Some of these ancient trees died due to climatic changes, others due to the farming techniques of our stone age ancestors. Thousands of years later, they re-appear due to turf-cutting, land drainage and occasionally, tidal action.

The bog wood seems to emit a haunting power - the perfect medium for a sculptor's imagination who chooses to work with the material. Such treasures refuse to be forced."

"All sculpture is worked using mallet & chisels; small sander to help initial sanding and finishing by hand with fine grades of sand paper. I occasionally burnish with bone.

The sculptures are then treated with several coats of raw linseed oil & turpentine... Those destined for outdoors are given additional coats, while indoor work is finished in beeswax. Labour intensive, but really pleasing results. Some of the colours can be quite spectacular."

"I work in organised chaos with approximately 20 sculptures in various states of completion at any one time. The workshop is open to most of the elements (with the exception of rain)... it gives me a feeling of working outdoors throughout the year."