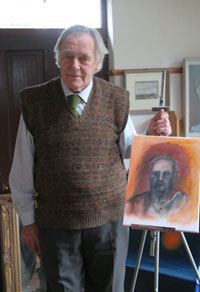 Jim Houston was born in 1924 in Dun Laoghaire, Co. Dublin and now resides in Westport, Co. Mayo. He was educated at Castlepark Dalkey and at Fettes College Edinburgh, where he also attended art classes at the Studio of Fabian Ware. He graduated from Trinity College Dublin in 1951. Jim attended painting classes in The van Gogh Museum Amsterdam. Jim is very widely travelled and he has worked in New Zealand, The Netherlands, Mexico and The Middle East.

Jim is currently represented in galleries in Belfast, Dublin, Cork and New York. His work is in private collections nationally and internationally.

"Art appreciation always should be free of pretension and those who visit art galleries require no specific education in order to decide what they like or dislike. For a painter to depict the colour, form and poetry of what he sees requires three things:

If these criteria are met, his own personal style will be apparent and whether or not it is admired, he can view it himself and know that this is what he wanted to say. If nobody wants to buy it, that is a separate matter entirely."