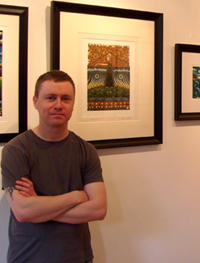 
Connor Maguire was born in Belfast, Northern Ireland in 1977. A former pupil of De La Salle secondary school ,Connor attained all his exams at GCSE and A-LEVEL and continued on to study at the University of Ulster in Belfast then taking a year away from his studies to work and travel where he spent a period of time in New York working in the United States.

Returning home Connor has now been working steadily as a freelance artist specialising in Illustration, Ceramics, Website design, framing as well as working in every type of medium that is accessible to him in regards of painting and drawing. Connors paintings are inspired from anything ranging from everyday events, personal experiences, friends or family. He also frames and mounts all of his work.

After having his first solo exhibition in the Down Arts Centre in May 2003 he has continued to exhibit taking part in solo and several group shows alongside Ireland's most respected artists such as Shawcross, Blackshaw and Carol Graham. His work lies in many distinguished collections such as the Lisburn Civic Arts centre amongst others and has been praised by individual collectors and painters alike, including the artist Jim Fitzpatrick.

Connor's work has also been published by a Californian fine art company featuring in a book entitled "Creative Minds". Winning the Chairman's award in 2003, Connor has gone on to win the Stephens award, Anne Cheyne award and Carnathan galleries awards amongst others. He is the youngest member to gain membership to the Ulster Watercolour Society and exhibits on an annual basis with his paintings selling in each show. He has produced a limited edition range of work making his images more accessible to the public in the form of greeting cards and limited edition giclee prints.

After exhibiting in Hillsborough Castle he has received a letter from Prince Charles of Clarence house congratulating him on his participation and contribution to "The Prince's Trust" and success in the art world.

He has also been interviewed for many art magazine articles. He was contacted most recently by Red dot publications who are publishers of Northern Irelands top selling bridal and home magazine who wished to interview him as a main feature for their magazine "Northern Ireland Pure Homes" which can be seen in either the June /July issue 2008.He also has just recently had a personal interview with journalist Jenny Lee who has done a full illustrated feature on his latest work for "The Irish News" which can be seen in print on the 10/05/08.

He currently has a solo show entitled "A Collection so Far" which is displaying 14 pieces of his new work in the Down Arts Centre in Downpatrick beginning on the 8th May 2008 and will run for a period of 6 weeks until 21/05/08. He also has a group show with the UWS taking place in the Old Northern Bank building in the Cathedral quarter in Belfast on the 29TH May 2008.