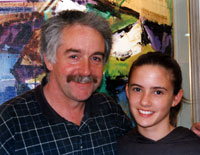 Born in Dublin in 1949, John studied at the National College of Art and Design in Dublin and at the Etching Centre in Geneva.

Most of John's etchings, about 150 editions by 1994, have been published by London Contemporary Art and marketed worldwide through their dealerships. The main markets have been in the United States and Japan.

From 1979 John has worked with three main themes; landscapes, seascapes and sporting images. The sporting subjects are golf and yachting.

John's work has appeared in the films "Wall Street" with Michael Douglas and "Regarding Henry" with Harrison Ford.