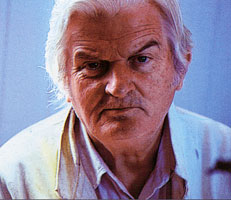 Seán McSweeney is one of Ireland's leading artists; his bog pools and Sligo landscapes are iconic in Irish painting. Vibrant primaries mingle with dense blacks to suggest an almost primal depth.

Seán McSweeney was born in Dublin in 1935. A painter who concentrated on the landscape, Sean lived in Wicklow for 17 years prior to moving to Sligo where he has lived since. He has been the recipient of many awards including The Oireachtas Award (1968), The George Campbell Travelling Award (1980), the Carroll Award, IELA (1987), winner of The Claremorris Open Exhibition (1987/1988) and in 1989 he was awarded Bonn An Oireachtas.

In addition to his many solo and group exhibitions in Ireland, Seán's work has been shown abroad in Scotland and Wales in 1971 in "The Celtic Triangle" and "The Delighted Eye Exhibition"; "A Sense of Ireland", London, 1980; Cagnes-sur-Mer, France in 1985; Beverly Hills, California in 1986 and at the Bicentennial Celebrations (Australia) in 1988. There was a Major Retrospective of his work at the Galway Arts Festival in 1990 and the RHA Gallery, Dublin.