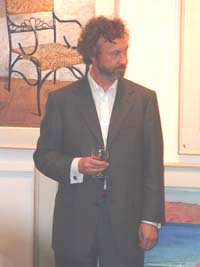 Born in Ennis, County Clare in 1958, Mick O'Dea studied at the National College of Art and Design and the University of Massachusetts from 1976 to 1981. More recently, he studied at Winchester School of Art in Barcelona and Winchester where he was awarded an M.A. in European Fine Art in 1997.

This artist has won several awards. He was given four at the Arnotts National Portrait Awards Exhibitions in 1985, 1989, 1993 and 1994. He was granted the K.M.P.G. award at the Annual Oireachtas Exhibition in 1992 and 1998. Other awards include a major Arts Council Bursary in 1986, a prize at the Claremorris Open Exhibition in 1990, an Art Flight to New York - as well as the E.S.B. Kearing McLoughlin Medal at the 1993 Annual Exhibition. He was elected an A.R.H.A. that same year. He received the Taylor De Vere Award for a Work of Distinction in any medium at the R.H.A. Annual Exhibition in 1995, and in 1996 he was elected an R.H.A. and a member of Aosdána.

Mick O'Dea has exhibited widely in Ireland, Latvia, the U.K. and the U.S.A. and more recently in Spain. His work is included in a number of collections including The Arts Council of Ireland, The Royal Hibernian Academy, The National Gallery of Ireland, The Bank of Ireland, Allied Irish Bank, Trinity College Dublin, The University of Limerick, The National Self-Portrait Collection, The National Drawing Collection, Limerick City Gallery, Clare County Council, G.P.A. Shannon, The Office of Public Works, The Cesis Museum of Art, Latvia, Jurys Hotel Group, St. Patrick's Hospital and the Ballinglen Arts Foundation.

Mick has participated in residencies in Ireland, including the Tyrone Gutrie Centre, County Monaghan in 1991 and 1992; the Ballinglen Arts Foundation, County Mayo in 1998 and 1999 (awarded Fellowship); the Cill Reilig Project, County Kerry in 2000 and 2001, and at Áras Éanna, Inis Óirr, Aran Islands, County Galway in 2003 and 2004. He participated at the Watercolour Symposioum in Latvia in 1990 and 1991, at the Centre d'Art i Natura in Catalunya, Spain in 1996, and at the Vermont Studios, USA in 2002 (awarded Fellowship). His skill as a portrait painter has brought him many commissions, including ones from Hong Kong, Europe and the USA.

O'Dea is an artist with a vivid awareness of the roots of his painterly tradition. He sees himself as being located within the scope of the Northern Renaissance, with an essentially humanistic approach and as being firmly in the academic tradition, but not in the classical sense. He is a natural observer and has a defined approach to beginning work on the blank canvas, "You begin by getting familiar with the geography," he said, "then go about trying to capture the essence of the person."