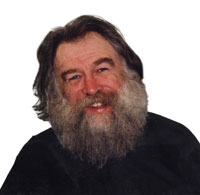 Bill Griffin was born in Cork in 1947. Self taught, he started working as an artist in London in the mid 1960's with limited critical and practically no commercial success. In 1971, unable to exist on the proceeds of his art he went to work in the Oilfield. Although reaching top levels, "The onset of the ultimate madness" as he describes it persuaded him to abandon his very successful career and return to being a full time painter in 1999. He held his first solo exhibition to high critical acclaim in Cork as part of St. Finbarre's Cathedral in 2000 and has had eight solo exhibitions since. Group shows include Outsiders, Crawford Gallery 2004, C.2, Crawford Gallery 2005, Solo Gallery Waterford 2003.

Griffin is known to produce religious art, responding to the overlap of the human and the divine. He also brings much of himself to his work. Compassion shines through strong images; joyful yellows and pinks offset dark reds and purples. There is a sustained and unforced continuity between the depiction of the human and the divine. The unresolved character of many of these paintings puts the act exactly where it should be - in the eye and the imagination of the viewer. In this sense it is entirely generous and altruistic.

Griffin is as a conduit to the unconscious world of free expression. His reluctance to lead the viewer with over-descriptive titles forces the viewer to engage with the work. Griffin's paintings begin life in his darkened cellar with barely enough light to make out shapes, objects or mute colour. In this space he is able to expand his consciousness to encompass that of his surroundings so that in effect he is able to bring the canvas within the sphere of his consciousness. From childbirth we spend our lives learning to formalise and quantify our thoughts into some form of expression or communication that most closely relates what those actual thoughts are. But how difficult this is for us; how often have you not been able to express exactly what you're feeling because you have been limited by the formulation of language and communication! To get the purity of thought, memory and experience across the social divide one must use the channels of verbal and body language, facial expressions, the written word and any other communicative tool at one's disposal. This very process however dilutes its very essence and can even have the Chinese whisper effect upon what one initially is trying to convey.

This is the world where Griffin is trying to bypass the hindrances of the learned systems of language and use symbolism to expose us to the purest of imagery that will take us to the inner space of the mind of the artist. There is never an explanation of what the work is about from Griffin. The viewer must accept it as presented and not just view it but also engage with it; if possible they must try and assimilate this presented image into their own consciousness.

Colour is his voice and symbolism is his language.

"What do you think deserves our greater admiration - the products of the natural world, fashioned through nature's ageless realms, or our own meagre creations?

Since I was a child growing up in the north of Cork City, I have looked in awe upon the abilities of the mason craftsmen, stone carvers and glassworkers that shaped St. Fin Barre's Cathedral. With the most basic tools, mallets and chisels, they carved panels, gargoyles and high flying birds of prey. With rope and pulley, they elevated their handiwork and gave Cork a spirey crown.

Their spirits are still here trapped like insects in amber they whisper their stony stories Saints, sinners and fierce winged gargoyles all tell tales both wise and foolish. Angel trumpeters heralding an end, which is also a beginning. Such things bind art and religion.

Even in it's' most distorted abstraction or minimalist creation, the attachment of art to religion is fundamental. Today, when the role of implantation of attitudes and opinions is so easily swayed, and the apparatus for generating indignation is held in the hands of a like-minded few; only art and religion provide any viable counterbalance. Against municipally funded research projects that systematically distort or even invent scientific evidence, they are our soul defence.

In many of these paintings I have used a kind of auto technique. Images are firstly perceived from random applications of paint, then enhanced or defined as the painting is developed. As such they are generally painted from the inside out, i.e. a single accidentally formed feature might later develop to a coherent pictorial idea. By using this type of auto technique I hope to achieve a deeper subconscious vision and exorcise my many ghosts in the process. In others I have tried to depict reality in a more straightforward manner, though my aim has remained to create introspection and thought."