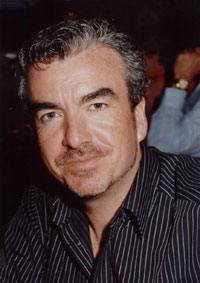 TJ Miles was born in Co. Antrim in 1965. He studied art until he left school at 16 to begin his working life. After a variety of positions he went back to part time education to retrain for a career in other fields, as he felt he had become trapped in the 9 to 5 routine of "normal" life.

Never one to remain still for long, he began to reinvent himself. He decided that he wanted more challenges in life and started channelling his energies in other areas. He returned to education to study art and psychology. Then decided to shift his interests towards sociology instead of art.

Thankfully, TJ turned back to art about 10 years ago to fulfil a need to record experiences living in Northern Ireland. Originally working in watercolours, then progressing to acrylics for more flexibility to mould with his imagination.

TJ's passions for travel and art have been constant companions for many years. His art fuses elements of European surrealism with aspects of Irish figuratism and the viewer may readily discern the influences of Dali, De Chirico, Magritte and Markey in his work.

TJ commutes between his homes in Ireland and Spain and his 'Mediterranean' palette brings warmth to the quiet places he so joyously celebrates. There tend to be few figures in his paintings as he prefers to offer uncluttered landscapes into which the viewer may place themselves

Limited edition prints of his work are readily available in many gift shops and stores worldwide, while his paintings are now in private collections in Ireland, UK, France, Italy, Spain, Sweden, Serbia, South Africa, Australia, New Zealand, Hong Kong, Japan, Canada, Mexico and the USA, as well as corporate and public collections in Europe.