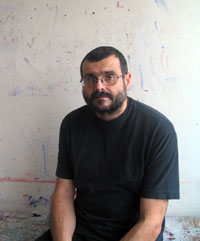 This series of panels, each of which refers to a section of the city, such as Latin, French, Italian etc, plays on the idea of incommensurability, that is to say on the idea that current culture is a de-centred, plural structure in which no principles of order can be determined that retain any permanence. Instead Heterotopia is a place that endlessly reflects itself replicating its own de-centred shifting language of multicultural symbols.

The panels depicting various quarters of the city then become a map to a chaotic multiculturalism in which the signs and symbols associated with particular cultures appear, at random, in what might generally be perceived as the 'wrong' quarter - for example Islamic text appearing in the Jewish quarter - thus causing the collapse of recognized models of cultural identity and the brief creation of new hybrid models.